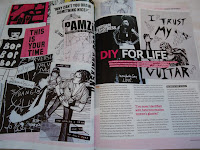 Firstly, following the success of our inaugural event in 2012, QZFL will now be an annual shindig. Yay! Details on where/when QZFL2013 will take place to follow, so link/friend/follow/bookmark us and hold tight for more news.

Also, I want QZFL2013 to be even better than last year, so I'm after savvy workshoppers, articulate guest speakers and a cabal of helpers who can lend a hand, be that shifting tables and chairs into place or handing out flyers at yr local student union/band rehearsal space/queer hangout. If you want in, get in touch.

Secondly, I've decided to set up a blog-within-blog for queer zine reviewing purposes! Because while I enjoy turning December into a big, queer Christmas, there are 11 other months of the year that could benefit from a little QZFLness. Want yr wares reviewed? Holler at me here. The guidelines for submitting are hella simple:

Huge thanks to everyone who tabled/workshopped/spoke/exhibited/attended/supported the inaugural Queer Zine Fest London event at Space Station Sixty-Five! We’re totally blown away by the turn-out and all the positive feedback. So many awesome people in one room! We also got a small mention in The Guardian (but didn't know about this until sunday when we woke up from big, recovery sleep on Sunday afternoon and caught up with Saturday’s papers. Consensus is that this should be an annual event, so we’re very happy to say that this will be the case! Bring on QZFL 2013 ♥

Keep up to date with all things QZFL here: 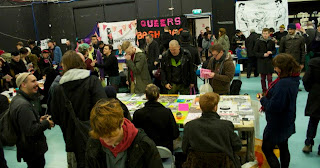 Picture via Pink Mince
Posted by QUEER ZINE FEST LONDON at 03:13 No comments:

An interview with Girls Get Busy zine 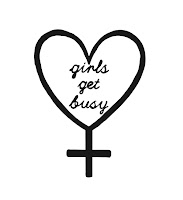 I'm a big fan of Beth and the work she does at Girls Get Busy. She's a pretty busy bee, and can usually be found setting up mini zine fests, girlcore events and feminist fundraisers when she's not putting together GGB zines. She interviewed us about QZFL, and gave me a chance to talk about motives, community and my queer zine faves. Read on....

http://girlsgetbusyzine.tumblr.com/post/34704692593/an-interview-with-queer-zine-fest-londons-organiser
Posted by QUEER ZINE FEST LONDON at 09:22 No comments: 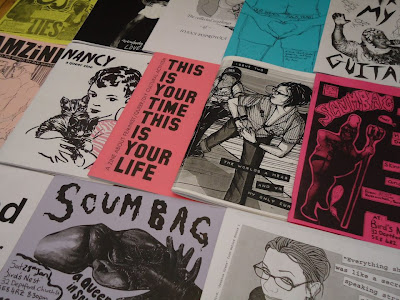 The inaugural Queer Zine Fest London will take place on Sat 8th Dec at Space Station Sixty-Five, SE11https://www.facebook.com/spacestationsixtyfive. Expect talks, workshops and stacks of queerific zines and art from the UK, US and Europe.